BUD Holland is known internationally as a leading importer of exotic fruit, exotic vegetables and specialty products from all around the world. When BUD Holland wanted to expand the system by adding a number of ripening chambers for exotic products such as avocados and papayas, the possibility of replacing the whole system was considered. The existing refrigeration systems and freezers were installed by Nijssen in 1994.

Attention was focussed on environmentally-friendly refrigerants on account of the fact that, since 2010, it is no longer allowed to use the existing refrigerant R22 for construction and expansion projects due to the emission of greenhouse gases. It was decided that a central refrigeration system would be used for the refrigeration cells, one freezer cell and the six ripening chambers. Ammonia was chosen as the primary refrigerant and CO2 as the secondary refrigerant.

As the project involved replacing and expanding an existing system, it had to be carried out in phases to keep the interruption of operations to a minimum. During the first phase, the new ammonia/CO2 machine room was built and structural work was carried out for the new refrigeration cell and six ripening chambers. After the start-up and commissioning of the central ammonia/CO2 system, the refrigeration cells were modified one by one and connected to the new system. 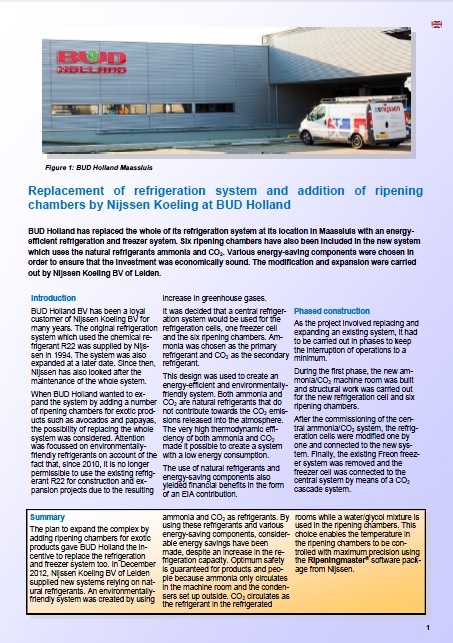 More information can be found in the detailed project description.

Would you like to learn more about our innovative projects? Call us at +31 71 521 62 14 or send an e-mail to This email address is being protected from spambots. You need JavaScript enabled to view it..